Each neighbourhood of the city has an organized group of people, the Casal fallero, that works all year long holding fundraising parties and dinners, usually featuring the famous specialty paella. Each casal fallero produces a construction known as a falla which is eventually burnt. A casal fallero is also known as a comissión fallera.

Formerly, much time would also be spent at the Casal Fallero preparing the ninots(Valencian for puppets or dolls). During the week leading up to March 19, each group takes its ninot out for a grand parade, and then mounts it, each on its own elaborate firecracker-filled cardboard and paper-mâché artistic monument in a street of the given neighbourhood. This whole assembly is a falla.

The ninots and their falles are developed according to an agreed-upon-theme that was, and continues to be a satirical jab at anything or anyone unlucky enough to draw the attention of the critical eyes of the falleros — the celebrants themselves.

In modern times, the Las Fallas festival has spawned a huge local industry, to the point that an entire suburban area has been designated the City of Fallas — Ciutat fallera. Here, crews of artists and artisans, sculptors, painters, and many others all spend months producing elaborate constructions, richly absurd paper and wax, wood and styrofoam tableaux towering up to five stories, composed of fanciful figures in outrageous poses arranged in gravity-defying architecture, each produced at the direction of the many individual neighbourhood Casals faller who vie with each to attract the best artists, and then to create the most outrageous monument to their target. There are more than 500 different fallas in Valencia, including those of other towns in the Valencian Community.

During Fallas, many people from their casal faller dress in the regional and Valencia costumes from different eras of Valencia's history — the dolçaina and tabalet (a kind of Valencian drum) are frequently heard, as most of the different casals fallers have their own traditional bands.

The days and nights in Valencia are one running party during the five days of Fallas. There are processions galore — historical processions, religious processions, and hysterical processions. The restaurants spill out to the streets. Explosions can be heard all day long and sporadically through the night. Foreigners may be surprised to see everyone from small children to elderly gentlemen throwing fireworks and bangers in the streets, which are littered with pyrotechnical debris.

Each day of Falles begins at 7am with La Despertà ("the wake-up call"). Brass bands will appear from the casals and begin to march down every road playing lively music. Close behind them are the fallers throwing large firecrackers in the street as they go. 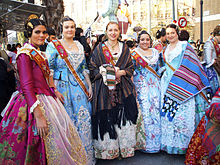 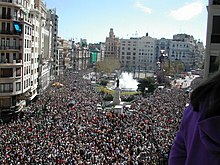 The Mascletà, an explosive display of the concussive effects of coordinated firecracker and fireworks barrages, takes place in each neighbourhood at 2 pm every day of the festival; the main event is the municipal Mascleta in the Plaça de l'Ajuntament where the pyrotechnicians compete for the honor of providing the final Mascleta of the fiestas (on March 19). At 2pm the clock chimes and the Fallera Mayor (dressed in her fallera finery) will call from the balcony of the City Hall, Senyor pirotècnic, pot començar la mascletà! ("Mr. Pyrotechnic, you may commence the Mascletà!"), and the Mascletà begins.

Mascletà is almost unique to the Valencian Community, hugely popular with the Valencian people and found in very few other places in the world. Smaller neighbourhoods often hold their own mascletà for saint's days, weddings and other celebrations.

Each falla casal takes an offering of flowers to the virgin. This occurs all day on their days of March 17 and March 18. The virgin's body is then constructed with these flowers.

On the nights of the 15, 16, 17, and 18th there are firework displays in the old riverbed in Valencia. Each night is progressively grander and the last is called La Nit del Foc, the night of fire.

On the final night of Falles, around midnight on March 19, these falles are burnt as huge bonfires. This is known as the cremà, i.e. "the burning", and this is of course the climax of the whole event, and the reason why the constructions are called falles ("torches"). Traditionally, the falla in the Plaça de l'Ajuntament is burned last.

Many neighbourhoods have a falla infantil (a children's falla, smaller and without satirical themes), which is a few metres away from the main one. This is burnt first, at 10pm. The main neighbourhood falles are burnt closer to midnight. The awesome falles in the city centre often take longer. For example, in 2005, the fire brigade delayed the burning of the Egyptian funeral falla in Carrer del Convent de Jerusalem until 1.30am, when they were sure they had all safety concerns covered.

Each falla is adorned with fireworks which are lit first. The construction itself is lit either after or during these fireworks. Falles burn quite quickly, and the heat given off is felt by all around. The heat from the larger ones often drives the crowd back a couple of metres, even though they are already behind barriers that the fire brigade has set several metres away from the construction. In narrower streets, the heat scorches the surrounding buildings, and the firemen douse the façades, window blinds, street signs, etc. with their hoses in order to stop them catching fire or melting, from the beginning of the cremà until it cools down after several minutes.

Away from the falles, there are people going crazy through the streets, with the city resembling an open-air nightclub, except that instead of music there is the occasionally deafening sound of people throwing fireworks and bangers around randomly. There are stalls selling products such as the typical fried snacks porres, xurros and bunyols, as well as roast chestnuts or various trinkets.